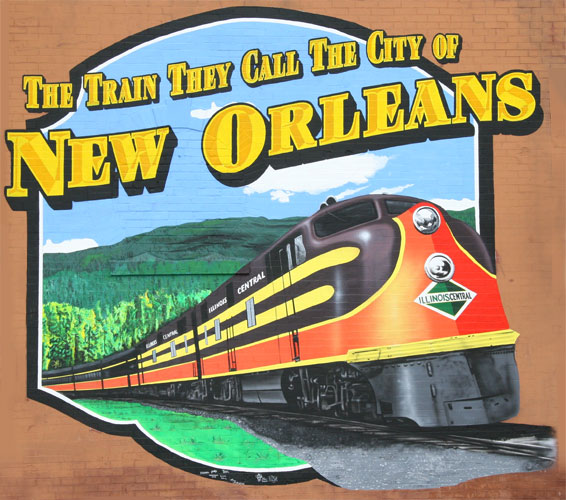 “City of New Orleans” is, of course, a classic country blues song written by Steve Goodman, first recorded by Arlo Guthrie, and made most famous by Willie Nelson in 1972 on his album of the same name.  It won a Grammy for songwriter Steve Goodman.  It hit #1 on the Billboard Charts.  It’s been translated into multiple languages including Finnish, French, Dutch and Hebrew.

It’s a haunting, sparse, elegantly-crafted song that narrates in exquisitely mundane detail the journey of the train called “City of New Orleans” on its regular route from Chicago to the Mississippi Delta.  It’s a gentle song, full of compassion and despair, connection and loneliness.  Nostalgia and grief.

All along the southbound odyssey the train pulls out at Kankakee
And rolls along past houses, farms and fields
Passin’ trains that have no names and freight yards full of old black men
And the graveyards of the rusted automobiles

It’s one of my favorite songs.

And every time I hear it, it stresses me out.

“City of New Orleans” stresses me out because it is, in fact, brilliant.  So brilliant that when I hear it, I want to turn to, well, pretty much everyone in the world and say, “Hey!  Did you know about this song?  This is a brilliant song!  You should listen to and be aware of this song because this song is too amazing not to be on your mind on a regular basis.”

But of course, “City of New Orleans” is probably not on anyone’s mind on a regular basis.  Not even on mine, and I’m the one stressing out about it.  I hear it, and when I hear it, I remember it, and when I remember it, I feel stressed because I’d temporarily forgotten about it and if I hadn’t happened to hear it by accident, maybe I’d have forgotten about it permanently, and a song that good shouldn’t just be forgotten about, and what if everybody else forgets, too, and this amazing song — this national treasure, if you will — just fades away without anyone realizing it’s gone?  (Yeah, I really think in pretty much just that run-on-sentence kind of way. No wonder I’m exhausted most of the time.)

I worry that if there were to be a musical Rapture in which a flock of angels swoops down to collect all the best songs and take them up to God as offerings, “City of New Orleans” will miss out and get left on earth with all the crappy songs because no one remembered to put it on the list of good songs that deserve to be in Song Heaven. And I worry because I feel that it’s somehow my job to make sure that it doesn’t get left off the list and I feel utterly inadequate to that responsibility.

Good morning America how are you?
Don’t you know me, I’m your native son
I’m the train they call The City of New Orleans
And I’ll be gone five hundred miles when the day is done

Of course, the reality is that “City of New Orleans” almost certainly does not need my help. It is, after all, a classic.  It reached #1 on the Billboard charts.  It won a Grammy.   It was recorded by (among others) Arlo Guthrie and Willie Nelson — two of the most iconic and enduring music icons of any generation.  It has been translated into multiple languages. It has its own relatively substantial Wikipedia page.  And the mere fact that I know it by heart even though it was written just about the same time I was born is proof positive that it’s not in any danger of being forgotten.

And even if “City of New Orleans” were in danger of being forgotten, I’m probably not in a position to do much of anything about it.   I’m not a music historian (or even a historian for that matter), nor am I a record producer, a museum curator, a folk song archivist, a musician or even a music blogger.  Nor do I aspire to be any of those things.  In short, I have no particular standing or credential that puts me in a position to secure the song’s place in history even if that place needed to be secured.

And yet I cannot seem to stop stressing about the fate of this song.

And not just this song.  “City of New Orleans” is just one of many, many songs that I feel this neurotic sense of responsibility for, which is why even though I love music, I don’t listen to it very often.  I have the same reaction when I hear Prince’s “When Doves Cry” (definitely in no danger of being forgotten) or Leonard Cohen’s “Hallelujah” (ditto), The Dixie Chicks’ “Home” album (hello, there was a whole international incident about it, SO not gonna get forgotten…) and the entire Billy Joel catalog (minus “Just the Way You Are,” which I very much wish would get forgotten and the sooner the better). And my stress reaction isn’t unique to songs, either —  I also worry for the legacy of Buffy the Vampire Slayer, The X-Files and Northern Exposure.  And for Top Gun and Evita and The Cutting Edge.  And the list goes on.

In all cases, it’s the same experience.  The pleasure that comes from connecting with something that touches me is overshadowed by the fear that it will be unappreciated by others, and by the longing to share my appreciation with someone else. And therein probably rests the deeper truth.

Hearing “City of New Orleans” reminds me that I have no one to share the things I love with. The last time I heard the song was at Trader Joe’s just a few days ago, when I was shopping alone for dinner-for-one. When “City of New Orleans” came on the overhead speakers, I felt the instinctive desire to turn to my non-existent special someone to share the simple, taken-for-granted-by-those-who-have-it pleasure of saying, “I love this song.”  Just that.  But I had no one to say that to.

In general, I am content to be alone — I love the silence and the stillness of sharing my daily life primarily with my animals.   I love the freedom to set my own schedule and to make big & small life choices without the impediment of another person’s ambitions or preferences.  I love being able to listen to”City of New Orleans” on repeat for an hour straight if I choose to, or binge-watching The X-Files in bed at 3 a.m. without disturbing someone else’s sleep cycle.  But I frequently ache beyond bearing for that simplest of all connections, the “I love this song” moment, and it is only the smallest exaggeration to say that the longing for that moment might be my single biggest reason for wanting a life partner.

Because, of course, the “I love this song” moment isn’t simple at all.  It’s about reaching out to another person to say, “hey, this is a part of who I am that matters to me, please accept me for who I am and what speaks to my heart and find value there” and having another person there to receive the message and say back, “I see and hear and value you. You are known and appreciated in the world.”

Since my longed-for “I love this song” moment that wasn’t available to me at Trader Joe’s, I did the thing I think many of us do — I silently lip synched the song while glancing at my fellow shoppers, hoping to find someone else doing the same thing with whom I could share a smile and a fleeting mutual acknowledgement of our shared appreciation for a really good song.   Seeking connection, however feeble and fleeting, just like the lonely people on the lonely train in “City of New Orleans.”

My anxiety over the legacy of “City of New Orleans” mirrors a more personal and existential anxiety that my own life is in danger of being forgotten, the things that I think and feel and love unshared with and unappreciated by the world — along with my fear that I am inadequate to the responsibility of creating my own legacy.   Someone is keeping score, whether we like it or not, and I don’t have kids who will roll their eyes at “mom’s music” but grow up to raid my record collection or a husband to share cultural memories with. Nor do I have a substantial public platform that affords me the opportunity to share my thoughts and perspectives with the wider world.  I worry about “City of New Orleans” being unappreciated and forgotten, because it’s less terrifying that facing the reality that I am in much more danger of being unappreciated and forgotten than an iconic, Grammy-winning, chart-topping country blues classic.

“City of New Orleans” can probably take care of itself.  What can’t take care of itself, what does — desperately — need my attention and protection is my own inner creative child, scared of being ridiculed if it shares itself with the world, scared of being forgotten if it doesn’t. Trapped in the liminal space of a train journeying through the night — in the world, but not of the world.

“City of New Orleans” doesn’t need a champion, but the creative spark inside of me urgently does.  I don’t have a special responsibility to the legacy of “City of New Orleans,” but I do have a special responsibility to the fragile but insistent inner spark of creativity and passion in my own heart that longs to be shared with the world around me, and to make sure that it’s not forgotten.

That responsibility isn’t unique to me, of course.  We all have a special responsibility to care for and nurture our inner creative selves, our passions, the best of who we are and the things that matter most of us.

Night time on The City of New Orleans
Changing cars in Memphis, Tennessee
Half way home, we’ll be there by morning
Through the Mississippi darkness rolling down to the sea

It crosses my mind that the story of an aging-but-still-chugging train rolling steadily through the heartland of America is not a bad analogy for the universal human experience of longing for connection and acknowledgment, and a cautionary tale for what happens when we neglect these needs inside ourselves.  A train rolls along “past houses, farms and fields,” but doesn’t stop and put down roots.  It picks up and drops off an ever-changing group of people who come and go through its compartments, but it never forms lasting bonds with any of them.  It carries people and their ideas and passions to new adventures without itself sharing in those adventures.  This is the tragedy at the heart of “City of New Orleans” — the universal cautionary tale that makes the song a classic that will likely never be forgotten.

But all the towns and people seem to fade into a bad dream
And the steel rails still ain’t heard the news
The conductor sings his songs again, the passengers will please refrain
This train has got the disappearing railroad blues

“City of New Orleans” reminds us that everything about our lives is transitory and impermanent, and that it’s up to us to do the work of making sure that the passions & treasures of our heart have their fair chance at being appreciated and remembered after we’re gone. And that unless we make the conscious effort to share the best of who we are with the world, we will remain cursed along with Goodman’s lonely train, with the “disappearing railroad blues.”

Good night America, how are ya?
Don’t you know me, I’m your native son
I’m the train they call The City of New Orleans
I’ll be gone five hundred miles when the day is done