In pursuit of the secrets of the feminine, I’ve chanted, fasted, dieted, yoga-d, leaned in, let go, held on, sucked it in, let it all hang out, bought Spanx and gone commando. 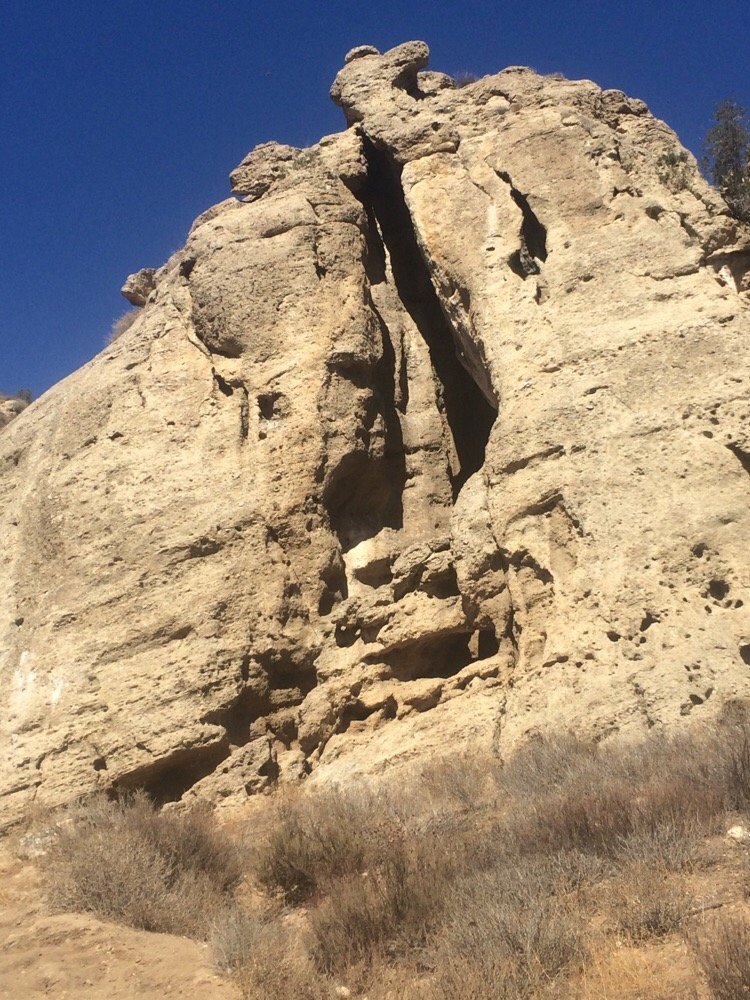 The path leading to the cave is steep and I have never climbed it. There’s always been a reason not to. There wasn’t time, it was too hot, too crowded, too late in the day.  But today, in the October twilight, it seems the thing to do and the time to do it.

The cave is less a cave and more a soft swollen crevice in the side of the cliff wall. Its intimate contours resemble nothing so much as… well, let’s just say that, transplanted to New Mexico and rendered in red sandstone, the cave wouldn’t be out of place in a Georgia O’Keefe painting.

At the top of the path, I discover that getting into the actual cave requires climbing a sheer rock wall about twenty feet high, and that the wall looks a lot like the climbing walls I’d seen at the gym, only without the safety of a lighted supervised facility and safety gear.  Not that I’ve ever actually climbed any of those walls at the gym.  Not that I even belong to a gym.

Given this unexpected complication, I consider turning back and trying another day. There are lots of other reasons why this would be a very good plan.  I’m wearing only a sundress and summer sandals, it’s near-dark, and there’s no way my dog will make it up the rock wall, which means leaving her down below while I climb, something she won’t be thrilled about, and something I’m not especially thrilled about either, given that near-dark is also coyote hour.

And yet.  I’m aware of a primeval tug to be inside. I’ve already fallen a bit in love with the vision of me sitting in this exquisitely feminine and intimate womb-cave watching the sunset and communing with the Goddess, etc, etc.  It all sounds so poetic, so romantic, so… epically mythological. I have the blog post half-composed already, full of lyrical and profound musings about archetype and symbolism and feminist spiritual metaphor.

The first half of the climb is tricky, but doable, and I surprise myself by how well I’m doing.  The next five feet are harder, the hand and footholds fewer and farther apart, but I push on because getting down is likely to be as precarious as getting up.

Every self-respecting spiritual seeker and storyteller already knows how this story is supposed to end — me pulling myself heroically up into the mouth of the cave and sitting, cross legged, spine straight, chakras aligned, third eye open, focused on the now, breathing in goddess energy as the golden rays of sunset illuminate my enlightenment and I feel a profound oneness with the universe and realize we’re all interconnected to the Goddess in the Great Spiral of Life.  Maybe I’d even chant a few “ohms” or at least manage the chorus of “I Am Woman.” 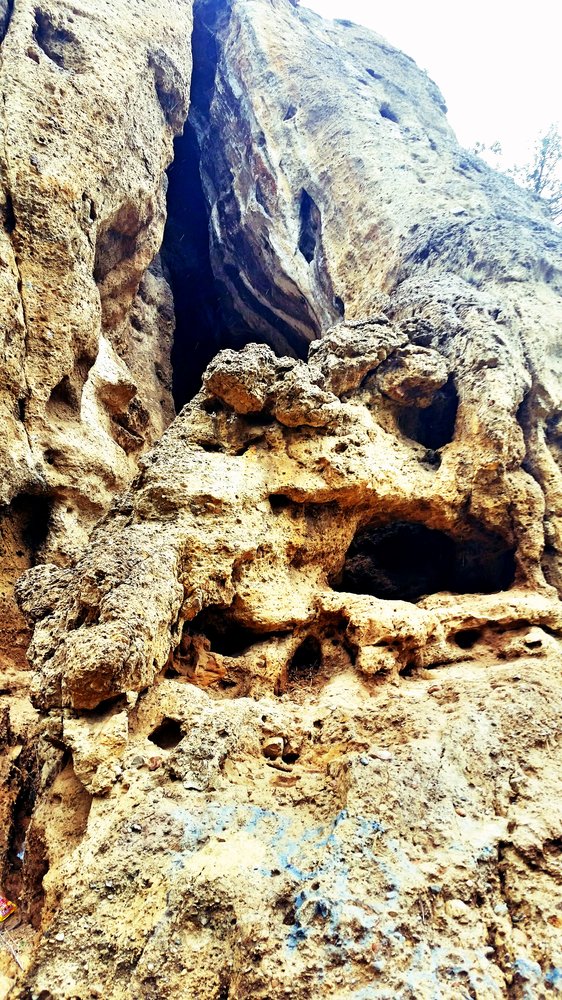 But back in the real world and metaphorical imperative to the contrary, what had seemed so inevitable from the canyon floor is not to be. The last five feet do me in.  I cling to the wall, out of hand and footholds, legs splayed against opposite sides of the crevice like a kitten down a well, lacking the upper body strength to pull myself into the cave.

Reluctantly, I concede defeat and scramble back down to earth, cast out of the temple of feminine wisdom and banished to the mundane valley below to rejoin the unenlightened, cursing the whole way.  Didn’t the *(#@! cave understand symbolism?  Didn’t the universe understand metaphor? (and what about my blog post!?).

The universe may not have understood metaphor, but I did, and the metaphor at work here wasn’t lost on me.

My ability to connect with the feminine has never come instinctively, even as I’ve longed for it.  As a girl, I hungered for inclusion in the quasi-magical society of “real girls” — the girls that are undaunted by the prospect of an eyelash curler, whose mastery of the blow dryer means their hair always looks like a Pantene commercial, who seem to know intuitively how to flirt with men (and women) of all ages to get what they want, and who move through the world with the inherited and instinctual grace associated with icons of femininity from Cleopatra to Taylor Swift.   Where did these goddesses-among-us learn these mysterious and magical abilities, and more importantly, why hadn’t I?

As an adult, my search for entry into the secrets of the feminine sisterhood continued, and the list of ways I petitioned for admittance ran from the predictable to the pathetic to the audacious.

In pursuit of the secrets of the feminine, I’ve read books about goddesses, books about feminism, books about sex and books about power. I’ve read Gloria Steinem and Phyllis Schlafly, Camille Paglia and Helen Gurley Brown, “Cosmo” and “Ms.” and The Rules and When God Was a Woman.  I’ve strutted in red stilettos that swelled my ankles and cramped my calves, done my best to “smize with my eyes,” endured the pain of the Epilady and the heartbreak of home perms. I’ve dated and slept with and lusted and loved men whose approval I thought would grant me admission. I’ve danced around bonfires with pagans at midnight and constructed altars to the Goddess in my bedroom, where I’ve submitted and dominated and role played and talked dirty, faked it, squeezed my kegels, suppressed my gag reflex, swallowed and slept on the wet spot. I’ve done 7-day juice cleanses and 21-day kindness challenges and focused on gratitude and worked to get in touch with my inner child, my inner mother, my inner goddess, my inner wise woman and my inner bitch.  I’ve chanted, fasted, dieted, yoga-d, leaned in, let go, held on, sucked it in, let it all hang out, bought Spanx and gone commando. All in the service of gaining entrance into the sacred cave of the Divine Feminine and the Society of Real Girls.

This piece has languished unfinished on my computer screen for awhile now, because I’m not sure I quite understand the moral of the story, though it seems likely there is one. Maybe it’s about pressure of expectations and the failure of reality to live up to them most of the time.  Maybe it’s about nothing worthwhile coming easily.  Maybe it’s just don’t go rock climbing unless you’re wearing sensible shoes.  I don’t know.

What I do know is this:  there’s been an awful lot of talk this past year about men who want to be women and women who want to be men.  And there seems to be an assumption that having the “right” parts automatically gives us access to the intuitive wisdom that comes with gender. It doesn’t.