Maybe more durable idealism isn’t the naive kind that only exists when you haven’t stepped close enough to the situation to see what’s really going on, but rather the more difficult and courageous idealism that if we look deep enough into the darkest places (or even just the most annoying ones), we are rewarded with a glimpse of the master’s brushstrokes.

It’s Sunday afternoon in Los Angeles, and the dogs and I are at Lake Balboa — a picturesque pond in LA’s San Fernando Valley (despite the optimistic name, it’s not big enough to be a lake anywhere but in drought-ravaged California).

The scene is more than a little similar to Seurat’s iconic Impressionist painting,  A Sunday Afternoon on the Island of La Grande Jatte — perfect 70 degree weather, spring leaves on the trees, a young mother fishing while her little boy feeds the ducks, teenagers on their skateboards, a businessman walking his dog, young lovers on the grass…

We approach the lake, the dogs sniffing this way and that, and I feel a bubbly burst of mental Pop Rocks at this scene of joy, peace and community among my fellow human beings.

Well, for a few minutes anyway.

Most of us probably remember from Art Appreciation 101 that Seurat’s Sunday Afternoon was painted in a style called pointillism, a form of Impressionism in which countless tiny dots of paint coalesce into a coherent scene only when you stand far enough away to blur the dots together.

As we begin to walk along the lake, life imitates art — the peaceful overall scene is soon overwhelmed by the details of what my fellow human beings are really up to.

The family that’s feeding the ducks is doing it right in front of a sign that explains that feeding wildlife is bad for the ducks and to please not do it.  The kids on the skateboards speed dangerously close to pedestrians instead of yielding right of way.  The young lovers are pushing the boundaries of PDA with their intimate grope-fest.  The businessman is ignoring his dog in favor of yelling a steady stream of expletives into his cell phone.

Being someone who generally prefers animals over people, it’s mostly the thing with the ducks that really starts getting to me — watching parents let their kids feed the ducks right in front of signs that explain that feeding the ducks actually hurts the ducks, I can only conclude that either the epidemic of illiteracy is far worse than anyone has realized, or more disturbingly, that a significant percentage of us will choose to do something that gives us pleasure even though we know it hurts someone else — and that we’ll teach that behavior to our children, too.  Neither is a particularly ringing endorsement for our species.

So much for the fizzy Pop Rocks of joy.

It’s not that the afternoon is ruined exactly — after all, it is still a beautiful park on a beautiful spring day.  But once I notice the not-so-idyllic details of what my fellow human beings are really doing, I can’t seem to recapture that blurry sense of idealism that had made those psychic Pop Rocks fizz in my brain.  I can’t seem to step back from the details to appreciate the larger painting.

I start to despair that realistically the only way I’ll be able to truly enjoy a walk around this lake or any other — or life in general, really — is if the zombie apocalypse wipes out everyone else on the planet leaving just my dogs and me (well, and the zombies, of course, who can apparently be pretty annoying, too).

Getting more and more irritated the longer we walk, I wonder– has our sense of community and respect for those around us deteriorated so far that the only way to function is to blur our vision so we don’t see the reality of what’s happening around us?  Is this really a new problem, or was it always so?  If I’d walked into Seurat’s painting in 1884 and the frozen figures in it came to life, would they behave as selfishly as their 2015 counterparts?  Was it really going to take a zombie apocalypse to get some peace and quiet around here?

But as we continue around the lake, I begin to think more about that Art Appreciation class from years ago — the professor, 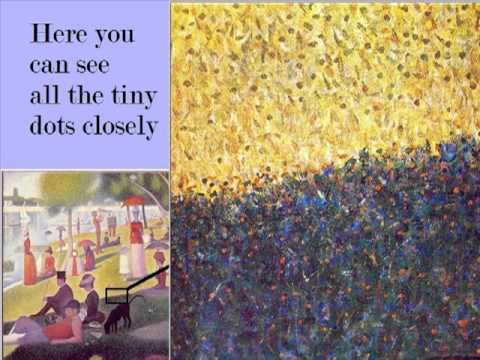 passionate about art and educated in Seurat’s technique, showed us a magnified section of Sunday Afternoon and explained the mastery of craft required to construct a huge painting out of millions of tiny dots applied one at a time, by hand.  Yes, the overall scene was lost in the details, but what was gained was the richer appreciation for the complexity of the work and the painter’s skill in creating it.

Maybe trying to hold onto joy in the face of humanity’s many flaws by blurring out the bad behavior of our fellow humans is the wrong approach.  Maybe instead of stepping back from the painting, the answer might instead be to step close enough to appreciate the complexity of design in the artist’s work — to do the work of learning to understand the dots rather than trying to blur them back into a fuzzy whole.

Yeah, the kids on the skateboards were hogging the sidewalk and not thinking about how they were endangering others. But they were also reminding me to take chances, to exceed life’s speed limit once in awhile.   The young lovers pushing the boundaries of decency on the spring grass are direct descendents of the ancient tradition of ensuring fertile crops by copulating in the fields after planting. Feeding the ducks encourages kids to appreciate and care for wildlife, even if they aren’t going about it in quite the most environmentally-conscious way.  And the guy swearing into his cell phone is actually… yeah, I got nothing for that one.  Sorry, cell phone guy, that’s just obnoxious.

But still… maybe Seurat and his fellow Impressionists (and my art history professor) understood in a way most of us don’t that human nature is best viewed either from the wider and blurrier perspective of idealism, or through the detailed lens of empathy and insight.  It’s in that middle perspective where we see the flaws without the benefit of wisdom or compassion that gets us into trouble.

And maybe more durable idealism isn’t the naive kind that only exists when you haven’t stepped close enough to the situation to see what’s really going on, but rather the more difficult and courageous idealism that if we look deep enough into the darkest places (or even just the most annoying ones), we are rewarded with a glimpse of the master’s brushstrokes.

So did I achieve that deeper and more elevated idealism during our walk in the park?  Oh good lord, no, but I did feel a bit better.  Mostly I just wished people would stop feeding the ducks.